The Quran Oceans And Seas!

Staff member
THE QURAN ON OCEANS AND SEAS​
​

BARRIER BETWEEN THE OCEANS

Modern Science has discovered that in the places where two different seas meet, there is a barrier between them. This barrier divides the two seas so that each sea has its own temperature, salinity and density.” (1)

Here we see the divider between theMediterranean and the Atlantic ocean. In the middle of this photo we see a colored triangle, this is the base of the rock of Gibraltar. We can observe a colored partition between the two bodies of water, although the naked human eye cannot perceive it in nature.

This has become possible by means of satellite photography and remote-sensing techniques. These are partitions that can only be seen and perceived by scientific research and modern

technology.Allah has informed us in the Qur’aan that:

He has let free the two seas meeting together: Between them is a barrier which they do not transgress. (Qur’aan 55:19-20).
Traditionally, there have been two major interpretations of this verse. The Qur’aan goes on to state that there is barrier between them, means that this barrier will simply prevent the seas from encroaching upon each other or flooding over each other.

Proponents of the second opinion ask how can there be a barrier between the seas so that they do not encroach upon each other, while the verse indicates that the seas meet together? They concluded that the seas do not meet and sought another meaning for the term "maraja". But now modern science provides us with enough information to settle this issue. The seas do meet together, as we have seen, for example, in the picture of the Mediterranean and Atlantic Ocean. Even though there is a slanted water barrier between them, we now know that through this barrier the water from each sea passes to the other.</td></tr></tbody></table>

But when we the water from one sea enters the other sea, it looses its distinctive characteristics and becomes homogenized with the other water. In a way, this barrier serves as a transitional homogenizing area for the two waters. This is an excellent example of Islamic modern scientific research. Modern techniques can thus be used to prove the inimitability of the Qur’aan.

Modern Science has discovered that in estuaries, where fresh (sweet) and salt water meet, the situation is somewhat different from what is found in places where two seas meet.

It has been discovered that what distinguishes fresh water from salt water in estuaries is a ”pycnocline zone with a marked density.

(2) discontinuity seperating the two layers.” This partition (zone of seperation) has a different salinity from the fresh water and from the salt water (3)

“He is the one who has let free the two bodies of flowing water, one palatable and sweet, and the other salty and bitter. And He has made between them a barrier and a FORBIDDING PARTITION.” QURAN (25:53)


DARKNESS IN A DEEP SEA

The darkness in deep seas and oceans is found around a depth of 200 metres and below. At this depth, there is almost no light. Below a dept of 1000 metres there is no light at all. (4)

Scientists have only recently discovered that there are internal waves which “occur on density interfaces between layers of different densities. (5) 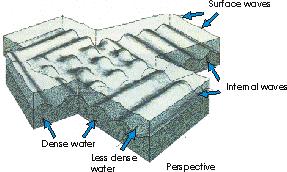 
This is no less than a reminder to (all) the worlds. And you shall certainly know the truth of it (all) after a while.(38:87-88).
https://www.islamstickers.uk