Staff member
THE QURAN ON HUMAN EMBRYONIC DEVELOPMENT
“We created man from an extract of clay. Then We made him as a drop in a place of settlement, firmly fixed. Then We made the drop into an alaqah* (leech, suspended thing, blood clot), then We made the alaqah into a mudghah** (chewed, lump)” ( QURAN, 23:12-14)

In comparing a leech to the embryo at the transitory stage (alaqah) we find similarity between the two. (1) Also, the embryo at this stage obtains nourishment from the blood of the mother, similar to the leech which feeds on the blood of others. (2) The second meaning of the word alaqah is &ldquo;suspended thing&rdquo;... The suspension of the embryo, during the alaqah stage, in the womb of the mother. (3) 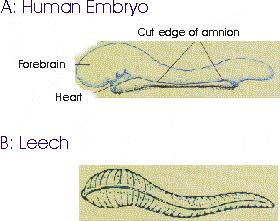 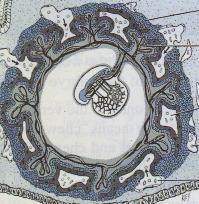 When comparing the appearance of an embryo at the mugdah stage with a piece of gum that has been chewed, we find similarity between the two. &ldquo; We created man from an extract of clay. Then We made him as a drop in a place of settlement, firmly fixed. Then We made the drop into an alaqah (leech, suspended thing, blood clot), then We made the alaqah into a mudghah (chewed, lump)&rdquo; (23:12-14)</td>

We find that the external appearance of the embryo and its sacs during the transitory stage (alaqah) is similar to that of a blood clot. This is due to the presence of relatively large amounts of blood present in the embryo during this stage. (4)

The blood in the embryo does not circulate until the end of the third week. (5) Thus the embryo is like a clot of blood at this stage! The embryo at the mudghah stage acquires the appearance of a chewed-like substance because of the somites at the back of the embryo that &ldquo; somewhat resemble teethmarks in a chewed substance.&rdquo; (6)

(2) Human Development as described in the Quran and Sunnah, Moore and others, Page:36

(3) A brief guide to understanding Islam with colorful illustrations, I. A. Ibrahim, Page:6

(4) Human Development as described in the Quran and Sunnah, Moore and others, Page:37-38


Joe Leigh Simpson, Professor of Obstetrics and Gynecology at the North Western University in Chicago in the United States of America. As we know, these chromosomes contain all the characteristics which the new human being will have such as the color of the eyes, skin, hair, etc. Hence, many of the details in the human being’s make-up are determined in his chromosomes. These chromosomes begin to form during the early nutfah stage of embryonic development. In other words, the distinguishing features of the new human being are determined from the very beginning at the nutfah stage. Allah, the Most Exalted, the Most Glorified, has stated this fact in the Qur’aan:

During the first 40 days of gestation, all the body parts and organs are completely, though consecutively formed. The Prophet Muhammad, (sallallahu ‘alaihi wa sallam), has informed us in a hadeeth that: In every one of you, all components of your creation are gathered together in your mothers’ womb by 40 days. (Narrated in Saheeh Muslim and Al-Bukhaari).

In another Hadeeth, Prophet Muhammad (sallallahu ‘alaihi wa sallam) said: When forty-two nights have passed over the drop (nutfah), Allah sends an angel to it, who shapes it and makes its ears, eyes, skin, flesh and bones. Then he says, "O Lord, is it male or female?" and your Lord decides what he wishes. (Narrated in Saheeh Muslim). Professor Simpson studied these two hadeeths extensively, noting that the first 40 days constitute a clearly distinguishable stage of embryogenesis. He was particularly impressed by the absolute precision and accuracy of those hadeeths. Then during one of the conferences which he attended he gave the following opinion: So that the two hadeeths that have been noted can provide us with a specific time table for the main embryological development before 40 days. Again, the point had been made repeatedly by other speakers this morning that these hadeeths could not have been obtained on the basis of the scientific knowledge that was available at the time of their recording. Professor Simpson says that religion can successfully guide the pursuit of knowledge. The West, as we said, has rejected this. But here is an American scientist who says that religion, namely Islam, can achieve this with success. By analogy, if you go to a factory and have with you the operation manual of the factory, then you will be able to easily understand the kind of operation that goes on in that factory, thanks to that manual by the factory designer and builder. But if you do not have this manual with you, chances are much less that you will have good understanding of the various processes there.

Professor Simpson said: It follows, I think, that not only is there no conflict between genetics and religion, but in fact religion can guide science by adding revelation to some traditional scientific approaches. That there exists statements in the Qur’aan shown by science to be valid, which supports knowledge in the Qur’aan having been derived from Allah.

This is true. I also say that the Muslims can lead the way in the pursuit of knowledge and that they can accord knowledge its proper status. Moreover, Muslims know how to use knowledge as proof of the existence of Allah, May Allah be Exalted and Glorified, and to affirm the Messengership of Muhammad (sallallahu ‘alaihi wa sallam).
Last edited: Oct 15, 2020
https://www.islamstickers.uk